Condolence letter to Jackie Kennedy after President Kennedy was assassinated.

-from the Hoover Library

Dwight D. Eisenhower wrote this draft letter to Lyndon B. Johnson after the assassination of President Kennedy.

-from the Eisenhower Library DDE penned these remarks before making a public statement on the assassination of John F. Kennedy.

-from the Eisenhower Library

As with any presidential trip, domestic or foreign, there are innumerable details to be taken care of: programs printed, invitations sent, speeches written. Now these items are poignant instead of prosaic.

-from the Clinton Presidential Library

What do you do after your favorite football teams have been defeated on the football field?  Wayne Mack of WGSO New Orleans wrote to President Ford to ask for a State of Emergency to be announced in Louisiana in wake of the thrashing that their teams received the previous weekend.

He reported that the New Orleans Saints had been “pecked into submission” by the Atlanta Falcons 14-7, Tulane University had fallen to Vanderbilt 6-3, and the Louisiana State University Tigers had been “devoured” by the Florida Gators 34-6. Mack wrote hoping for a “Football Welfare Program” to help rebuild after the disaster.

The letter was received by the White House, and the properly channeled to the Federal Disaster Assistance Administration (FDAA), the agency that handled these requests. The officials drafted and released a response.

The request to declare a State of Emergency was denied on the grounds that “the President can declare a major disaster for Louisiana only if the governor so requests.” Other options for disaster relief were offered, with Louisiana State possibly seeking “relief and rehabilitation of the Tigers under the Endangered Species protection laws” and help for the Tulane Green Wave coming “under the Coastal Zone Management program.” The New Orleans Saints seemed a longer shot as the judicial branch “may reject any action by Congress or the Senate on the grounds of separation of church and state.” This year the #15 ranked LSU Tigers might be in need of some disaster relief of their own, as they face the #1 ranked and undefeated Alabama tomorrow.

Although this letter was sent out under his signature and attributed to Press Secretary Ron Nessen in its subsequent publication in Louisiana newspapers, it was composed by Don Carbone, an employee of the FDAA. Nessen later sent a letter Carbone expressing his enjoyment of the piece and the need for humor in the often times trying environment that surrounds the White House and other government operations.

Check out more posts from our Football Friday series.

Iconic newsman Walter Cronkite was born 100 years ago on November 4, 1916.  His career as a broadcast journalist spanned 5 decades and 9 U.S. presidents.  From the 1930s to the 1980s Cronkite reported on the biggest news of the day including D-Day, the Nuremberg Trials, the Vietnam War, civil rights, the moon missions,  and Watergate.  It was Cronkite who broke the news of President Kennedy’s assassination, and he cover ed the subsequent killings of Martin Luther King, Jr., Robert Kennedy, and John Lennon.

In 1972, a nationwide poll determined that Walter Cronkite was “the most trusted man in America.”  Other choices in the poll had included contemporary journalists, the Vice President, and the President. (via @ourpresidents)

(Watch the complete footage on the @usnatarchives YouTube Channel)

This week Election Collection asks, what’s your Quirkiest Memorabilia? The answer for us is this chicken head worn by New York Times reporter and noted prankster Jim Naughton during President Ford’s 1976 presidential campaign.

You might be thinking, what the cluck? Well, the story begins in California on October 24, 1976, as the campaign entered the home stretch. Naugton and the rest of the White House press corps were covering a rally for President Ford at the Grossmont Shopping Center in La Mesa. As the rally begin a local radio mascot, the San Diego Chicken, appeared on stage with the President.

Naughton later recalled his amazement at the scene in his memoirs, writing, “I stood in slack-jawed awe and said, mostly to myself but aloud, ‘I’ve got to have that chicken head.‘” He managed to locate and purchase an extra one before continuing on to the trip’s next stops in Seattle, Washington, and Portland, Oregon.

The next day a new face popped up among the press corps at a question and answer session President Ford held with the press at Portland International Airport.

Everyone had a good laugh, including President Ford.

Jim Naughton kept the chicken head for many years before giving it to the Gerald R. Ford Presidential Museum while attending its dedication ceremony in 1981. Naugton’s prank was so memorable that 30 years later journalist Tom Brokaw mentioned it in his eulogy at President Ford’s funeral. He noted that “in the next news cycle, the chicken head was a bigger story than the president. And no one was more pleased than the man that we honor here today.”

Move over, Kenny G! This week’s #ElectionCollection theme is Pop Culture. Remember this musical moment from 1992, when Bill Clinton was running for President? He played “Heartbreak Hotel” on the saxophone on Arsenio Hall’s late night show. 6/2/92.

For this week&rsq uo;s #ElectionCollection challenge, share your favorite Presidential pop culture moments with us!

The Presidential Libraries of @usnatarchives and  @americanexperiencepbs want to see the cool campaign swag that you’ve collected. Share your own historic memorabilia and tag #ElectionCollection! 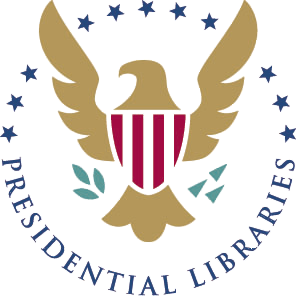 One space to bring the past 14 Presidents together. Discover behind-the-scenes history here.
We're a nationwide network of the U.S. National Archives.
For more information, visit Presidential Libraries
Please note: reblogs, likes, and follows are not endorsements.
Connect with us
Facebook
Twitter
Foursquare